DNF Review: THE NIGHT WE SAID YES by Lauren Gibaldi 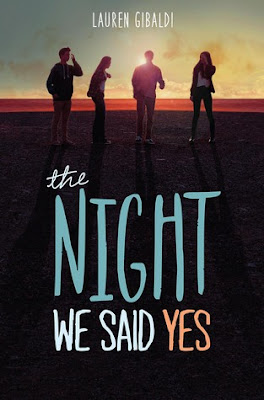 Title: The Night We Said Yes
Author: Lauren Gibaldi
Publisher: HarperTeen
Publication Date: June 16th 2015
Pages: 304
Format: eARC
Genre: YA, Contemporary, Romance
Read this if you liked: Since You've Been Gone, Emmy and Oliver, Tonight These Streets Are Ours
Rating: DNF (1.5/5 for what I read)

Before Matt, Ella had a plan. Get over a no-good ex-boyfriend. Graduate from high school without any more distractions. Move away from Orlando, Florida, where she’s lived her entire life.

And neither was attending a party that was crashed by the cops just minutes after they arrived. Or spending an entire night saying “yes” to every crazy, fun thing they could think of.

Then Matt abruptly left town, and he broke not only Ella’s heart but those of their best friends, too. So when he shows up a year later with a plan of his own—to relive the night that brought them together—Ella isn’t sure whether Matt’s worth a second chance. Or if re-creating the past can help them create a different future.

In alternating then and now chapters, debut author Lauren Gibaldi crafts a charming, romantic story of first loves, lifelong friendships, uncovered secrets, and, ultimately, finding out how to be brave.

I knew it would have to happen some time but it still sucks to write it: this is my first DNF review. It's rare that I don't finish a book. The only reason I won't finish is if it isn't capturing my attention and I'm sorry to say that The Night We Said Yes is one of those books. It's difficult to not feel like I have to apologise for writing this, but these are just my opinions!

I am tough on contemporary titles, especially romance. I know I am. It's harder to impress me with a love story that takes place in our own world - for whatever reason, I really don't understand it. Maybe I just don't like real life stories as much as I like dragons and unicorns, but whatever the reason, I find myself more critical if I have a romantic contemporary in my hand. I expect more from them. I hope for more. And more often than not I'm let down.

I'd heard so many good things about The Night We Said Yes and part of me kind of hoped Gibaldi's novel would be THE ONE. You know, the one that stood out among contemporary romances, made me swoon, made me want to run off into the sunset with it. Sadly, it isn't. I stopped reading at around 40% (with a quick jump to the end to see if my hunch about their relationship was right) and it took me weeks to even get that far. It's so strange because I know so many reviewers who adored this book and I wanted to love it. I feel like I've missed something!

I'll start by saying that I wasn't keen on the format and in my opinion that was the major problem with finishing this novel. It started well but the flitting back between the two nights where everyone agreed to say yes was, by nature, really repetitive. Sometimes it was kind of necessary to explain references, but I couldn't help but feel that those references could have been explained in the there and now as the story went on in a single narrative. The split time narrative was really disconnecting for me; one moment I was with Matt and El, then the group, and each time carried a totally different set of emotions. I found it hard to feel invested and to care about what was happening, when I was going to be pulled from it in the next instance only to be told the same thing again. I preferred the present. The emotions were more investing and tugged at my heart strings. I liked angry Ella and how the relationship had been torn to bits, and seeing how it was going to rebuild itself. I felt like focusing on the present rather than the past might have been a better way forward.

As for characters, I didn't feel like any of them really stood out. Matt is a bit of a drip and the reasons for him leaving seem contrived and flimsy. Meg (despite being a pretty awful friend at times) had more gumption than Ella, who I didn't connect with at all. As a MC, she's insipid. I'm so tired of reading about girls who 'cocoon' themselves after breaking up with a boy. It's that mopey, Bella Swan in New Moon type pining that drives much of Ella's character, which is probably why I just couldn't click with her. A big part of me hopes that the 'being brave' the blurb talks about is her telling Matt exactly where he can stick it at the end!

Then there are so many side characters that, as far as I got in the story, didn't make much of an appearance. The worst part of it all was that I couldn't picture any of them except for Matt's glasses and Jake's hair. There's nothing worse for me than a story where I don't have a clear image of what I'm working with in my mind. That's the problem with cookie cutter character tropes - there isn't anything memorable about them.

The sad thing is that Gibaldi can write. The words on the page are beautiful at times, but it's not enough. I feel like with this story, it's not a flat out no from me, but a not right now. I can see myself trying again one day but for the moment, this story didn't work for me. Hopefully if I give it a reread, I'll see what everyone else saw.