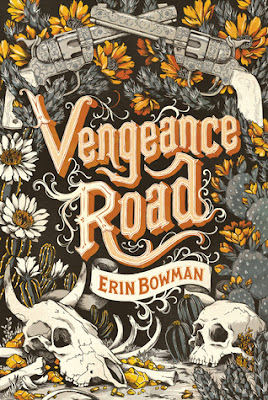 Title: Vengeance Road
Author: Erin Bowman
Publisher: HMH for Young Readers
Publication Date: September 1st 2015
Format: eARC
Genre: YA, Western, some romance
Read if you like: I honestly can't think of a title that compares with this, but if you're a fan of the old gritty Westerns (think Clint Eastwood) and Django Unchained, you'll love this
Rating: 4.5/5

I received an ARC copy of this book from HMH via Edelweiss (thank you!) but this no way affected my opinion of the novel. Being a member of Erin's street team also did not alter my opinion of Vengeance Road.


I've tried to write this review several times since finishing yesterday evening. When I read the first few chapters and reviewed them a few weeks back on this blog, I knew I was going to enjoy Vengeance Road. However, I underestimated just how raw this book would leave me feeling. As I tried to explain to my mum (after I cried in the hairdressers while reading it), it's been a long time since a book made me feel this deeply. Trying to put that into words has been difficult.

I'll start with the facts: Bowman has done her research. This isn't just a wishy-washy venture into the world of of the Wild West. From the history and inspiration of the 'Lost Dutchman' gold mine, right down to Kate's unrefined Western drawl, this novel feels beautifully authentic to the genre and fits in nicely to a line up with the likes of Clint Eastwood's The Outlaw Josey Wales, John Wayne's True Grit, and even more recent outings such as Tarantino's Django Unchained. One thing I love is that Bowman doesn't shy away from the cliches of the genre; there's this great scene in a bar where, at the mention of the bandit's name, the piano guy hits a dud note and they all whip out their guns. Later, in a shoot out, Kate's Stetson gets shot off her head. It's the little details like that which give the novel that Western flavour.

Speaking of authentic, if you're thinking that this being a Young Adult novel means that the typical grit and violence of Westerns will be watered down, think again. Vengeance Road not only matches its ilk in authenticity but in bloodshed. For me, the hard violence of this novel is great, but there's definitely a light, comedic side too, in the banter between the characters and in a few of the scenes. One of the biggest problems I face when reading is that I tend to see twists coming a mile off but Vengeance Road managed to totally throw me off balance with its shocking twists, not once but twice. Obviously, since this is a spoiler free review, I won't say what they were, but I didn't see them coming at all and I became as twitchy as a novice in my first gun fight.

It was really great to see the female characters of this novel presented as capable (but flawed) humans.  Kate, Liluye, Evelyn and co are some of the strongest heroines I've seen in YA in a while and I don't just mean in their ability to kick arse and take care of themselves. I'm a great believer in the fact that there are different kinds of strength and these girls show that. I don't know if Erin set out with a feminist commentary in mind but there's certainly argument for one! Liluye was a breath of fresh air; her stoic nature and convictions made her a really interesting contrast to all the other characters. I felt sad when we had to say goodbye to her, even though it was the right thing to do for the story. I'm glad Bowman explored the Apache history and culture as well as the Western frontier life. The Coltons...these boys have a special place in my heart. Jesse's being added to the Book Boyfriends list. He's not perfect, not by a long shot, but he's real. The contrast between him and Kate as characters, especially in how they handled certain situations within in the novel was beautiful. They're well matched and I loved that she didn't need him to save her. They worked best as a unit, rather than a damsel/hero dynamic. As an added note, anyone who is wary of this book because of a love triangle between Kate and the brothers, have no fear. This book is triangle free.

As our heroine, Kate obviously gets a special mention. Her voice takes some getting used to and generally speaking, I've always struggled with accented narratives. That being said, Kate's is done so well, and fits so perfectly with the Western genre that I was only a few chapters in when it started to read really naturally. It's nice to see such a distinctive voice; it's as abrupt and rough around the edges as Kate herself. And I loved Kate's progression as a character and where her quest for revenge took her. I went into the novel thinking that her thirst for blood would die out as the novel went on and she'd see a different path. While that is true to a certain extent, I was so glad to see her continue on, unapologetically vengeful. Again, it seemed truer to the genre for her to see the job through.

The only thing I can say as criticism is that the pace drops in the middle of the novel and that's the only reason, I didn't give the novel a full five stars. It seems petty when I write it now but the opening third of this book is like a bullet from a pistol and the last third is just as quick paced, so the long trek through barren Arizona feels like a bit of a drag. There's enough character development and playful banter to keep a reader interested but the contrast is very noticeable.

Other than that, this was damn near close to a perfect book for me and one of my favourite reads of the year so far. I've tried not to gush but this book was such a breath of fresh air that I really just want to tell everyone to give it a chance. I really hope that we see more Westerns creep into the YA and NA market because it would be a shame not to see more novels like Vengeance Road.