Review: THE LEVELLER by Julia Durango 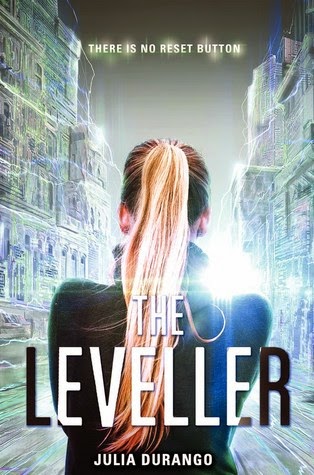 
Nixy Bauer is used to her classmates being very, very unhappy to see her. After all, she’s a bounty hunter in a virtual reality gaming world. Kids in the MEEP, as they call it, play entirely with their minds, while their bodies languish in a sleeplike state on the couch. Irritated parents, looking to wrench their kids back to reality, hire Nixy to jump into the game and retrieve them.

But when the game’s billionaire developer loses track of his own son in the MEEP, Nixy is in for the biggest challenge of her bounty-hunting career. Wyn Salvador isn’t some lazy kid looking to escape his homework: Wyn does not want to be found. And he’s left behind a suicide note. Nixy takes the job but quickly discovers that Wyn’s not hiding—he’s being held inside the game against his will. But who is holding him captive, and why?

Nixy and Wyn attempt to fight their way out of a mind game unlike any they’ve encountered, and the battle brings them closer than either could have imagined. But when the whole world is virtual, how can Nixy possibly know if her feelings are real?

(I received a copy of this in exchange for an honest review. This did not influence my opinion of the book. Thank you!)

I definitely like to see the good in all that I read but sometimes you can read a book and it just doesn't measure up to the high expectations you have for it. THE LEVELLER by Julia Durango was certainly a book that I wanted to love and I absolutely did enjoy a lot of it, but overall it fell flat for me.

There is a lot that Durango does right. For a start, the concept of virtual reality (although not new) was really intriguing and I have to admire the in-depth quality of the MEEP. The science of it and the dangers of staying too long felt believable and as I read it, I was prompted at several points to think about the perks and dangers of this type of gaming, knowing full well that I might see these kind of gaming advancements within my lifetime. The thoughtfulness of Durango’s argument was really compelling, not to mention the fun that Nixy had with her friends Moose and Chang in the MEEP was infectious. I wanted in on that! I also liked her relationship with her parents. It was good to see some parents in a YA novel that were involved, fun and not out to kill her. Durango is a good writer and built up suspense and generally, Nixy had a very distinct voice. And I absolutely loved the cover – the tagline pulled me in. 'There is no reset button' sounded so ominous.

The biggest problem I have with THE LEVELLER is the execution. There’s nothing worse than a book that hooks you in, promises you an exciting and interesting premise and then doesn’t deliver when it comes to the climax. I wanted to love it so much; the concept of an in-game hostage situation sounded very cool. The combination of Inception meets Tron was a mix that I felt really worked and I can’t deny that the author didn’t develop the MEEP and all its intricacies really well. However, when it came to the final chapters of the book (and even earlier than that if I’m honest), the plot started to feel dry, really predicable and very rushed as it came to a close. The revelation of who was really behind Wyn’s disappearance into the MEEP came as no surprise and the whole execution of it felt contrived and filled with tropes. The antagonist was monologue-ing and practically twirling their evil moustache. Then there was the Black – the edges of the game world that was comprised of undeveloped game space. It was such a sinister and deadly presence, but I was expecting more. It felt like it would be a character of its own earlier on, especially the way that LEGION spoke about it, but it really didn’t amount to anything, except to serve to some character development for Nixy later on. THIS WAS SUCH A SHAME. I really wanted the Black to be a bigger part.

As for the final chapter, I can’t even talk about how disappointed I was with the pacing. Everything was brushed away quickly in favour of an overly romantic and cheesy ending. It didn’t really feel like an ending at all. Durango had set up an entire network of potential antagonists with LEGION but there’s not even a whisper of the idea that they might cause more trouble for the Salvador’s and their MEEP system. The author spent time developing the system as I said, as well as its potential breakthroughs and flaws. It would have been really good to see whether LEGION’s fears about mind control and such like were founded, and whether Nixy would have sided with them eventually. It does say on Goodreads that THE LEVELLER is number one in a potential series but I think there is a fine line between leaving the audience with teasers to carry on reading and leaving a lot of loose ends.

And so we come to Nixy. As a protagonist, I think that Durango’s aim was portray girl gamers positively and I really admire that. She made Nixy tough and resourceful and I liked that she didn’t feel the need to enhance herself in-game. But for whatever reason, I just didn’t click with her and I can’t put my finger on why. I think it’s because she seems unreal – good at everything, succeeding where people twice her age and experience couldn’t. I liked Wyn Salvador a lot, and his relationship with his family and fervent belief in the good that the MEEP could do was really intriguing. I didn’t feel like he was a typical heir to a multi-billion dollar empire; he felt, above all else, normal which was okay, but a little bland. There were times (especially when I got to the end) where I wished that Wyn had been the antagonist of the book. I think that would have been a more interesting dynamic than to throw the two of them into instalove, which is what happens. I didn’t believe especially in their romance. Their feelings for one another come very quickly, though Durango gets around it by introducing uncertainty of the passage of time, and a memory wipe of their kiss. Sometimes the relationship between the two of them is believable and cute, but there are equally painful, forced scenes where the dialogue is just corny.

I’ve been pretty critical of THE LEVELLER, but as a whole, it is a good book. I read it very quickly, and I did really enjoy the first half of the novel. The descriptions in the book were great and I could definitely tell the author was passionate about gaming and technology. Durango isn’t a bad writer, which I think is what disappoints me most of all because she doesn’t quite pull off the potential of this story. That being said, it is a series, and maybe I'll find the answers to the questions I've been left with in later books. I really hope so!