Review: TROUBLE FROM THE START by Rachel Hawthorne 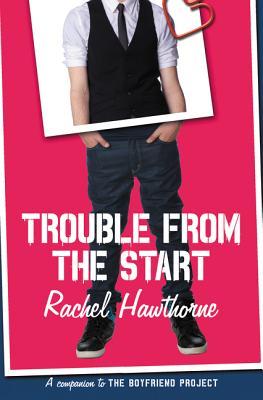 Title: Trouble From The Start
Author: Rachel Hawthorne
Format: eARC, received from HarperTeen via danasquare (Thanks to both!)
Publisher: HarperTeen
Publication Date: April 28th 2015
Rating: 4/5
Read it if you liked: Kissing In America, Anna and the French Kiss, The Boyfriend Project, City Love


Avery knows better than to fall for Fletcher, the local bad boy who can’t seem to outrun his reputation. Fletcher knows he shouldn’t bother with college-bound, daughter-of-a-cop Avery. But when their paths cross, neither can deny the spark. Are they willing to go against everything and let their hearts lead the way? Or are they just flirting with disaster?


(I received a copy of this from HarperTeen via Edelweiss in exchange for an honest review. This did not influence my opinion in any way. Thank you!)

I don't read a lot of contemporary. I always mean to but since I write fantasy and scifi myself, by allegiances tend to lie there when it comes to selecting reading material. Having said that, there are a few contemporary novels I'm really looking forward to reading and come very highly recommended. So, on New Year’s Day this year, when I was hauled up in bed with food poisoning, I thought I'd give Rachel Hawthorne’s companion novel TROUBLE FROM THE START a go. It is a YA contemporary that follows the romance between Avery Watkins, smart girl and general perfectionist, Fletcher Thomas, bad boy and school screw-up. It's the classic case of opposites attract with a few twists, but despite the familiarity of the set-up, I really liked the story.

I didn't read THE BOYFRIEND PROJECT, which TROUBLE FROM THE START is a companion to, but to be perfectly honest, I didn't need to. Hawthorne set it up so that everything between the main characters of the mother novel (Kendall and Jeremy) was pretty self explanatory. I liked the plot; Hawthorne didn't tell us everything about Fletcher right away, which was good and the pacing of the events was generally good. The ending felt a little rushed, and a little too neatly tied together; the major climax did seem like it was rushed through, whereas the week leading up to graduation was much longer in comparison (or so it felt to read). I would have loved to hear more from Avery and her parents about her decision to be a teacher instead, since this was one of the big aspects of her character (her trying to live up to expectations) but it was a little skirted over.

Avery was in danger of being a little too perfect for me, but I still liked her a lot. She was over-achieving, gave her time up to tutor, didn't go to prom because she was reading – classic brainiac, and the perfect foil to Fletcher’s trouble maker aspects, which saves her from being an all out Mary Sue. In fact, her perfection (or desire for it) becomes one of her major flaws, which is nice, but it was a dangerous line. Fletcher was a lot more interesting to read about and I wish his chapters had been longer, because at times they just felt like they were there to contradict the negative thoughts Avery had in the prior chapters. Having said that, Hawthorne challenges the bad boy perspective that gets used so often: a player comes to tempt good girls (which Avery most certainly is) to the dark side, and she changes his rakish ways. Fletcher isn't the bad boy, he's the victim of people's perceptions. It's kind of a twist on the classic case of misjudgment that goes all the way back to Lizzie and Darcy in Pride and Prejudice, but it was really good to see applied to a modern setting because reputation and the impression you give people is as vital now as it was in the 18th century.

Their romance was addictive. You know you want them together from the second he takes her home in chapter one and it's not spoiling it to say that, of course, we get our happy ending. It's a YA contemporary romance, a genre with certain reader expectations, and I went into TROUBLE FROM THE START knowing that this would be the conclusion. However, I'm always interested in how an author can take two characters you know will end up together from A to B. It's not the bumpiest of roads for Fletcher and Avery, but their biggest problems are frighteningly human – low self esteem, being afraid of disappointing people, and fear of failure. These are all things that as a reader, I could identify with. Not scheming exes or blackmail plots. The key behind the enjoyment of this novel is that it's so human.

Well, that, and having a hot male lead doesn't hurt. And the first kiss between the two of them is a delight! For the chapter afterwards, I was still thinking about it. I think Hawthorne could have afforded to have a few more teasing moments leading up to it because although we know they're attracted to one another there's not a lot of physical tension but it works fine without. For me, personally, I like a teensy more tension before the Big Crunch, but that's just me.

The supporting cast weren't bad, but they were a little vague. I like Avery’s parents, especially her dad. I'd like to see more Marc; he was funny and his unrequited love for his coworker was definitely something that could become another novel. He made me laugh and out of all the male sub characters, he was the best. I felt like I'd have liked Kendall and Jeremy more if I'd have read the previous book, because they did feel like they were there to make Avery feel like the third wheel, which of course, isn't the case.

The writing style was good, although there were moments when I felt that the author was just skimming over description to get the story going, so we ended up with lots of filler sentences or paragraphs. Besides that I found it easy to read, engaging, and I read straight through in about six hours!


All in all, it was a fun, sweet read that was a little different to the norm. As I've said, I really liked reading it. I would read Hawthorne’s books again!